What is the black swan theory? 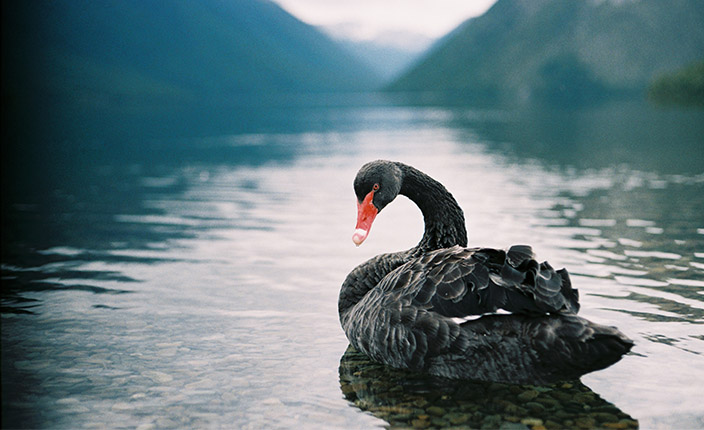 The black swan theory is a metaphor that describes, in the field of economics, those events that occur by surprise, which none of the analysts had foreseen or taken into account because, a priori, they were unlikely and which, for good or generally for bad, end up having a huge impact and far-reaching repercussions.

The creator of this theory is the economist, Nassim Nicholas Taleb, who named it so because, until the arrival of the first explorers in Australia in the 17th century, all swans in Europe were thought to be white. The discovery of this type of bird with black feathers was a fact that was considered highly improbable, but it happened and it changed the perception that there had been up until that moment. In this way, Taleb seeks to question the economic analyses that are used to predict the future by means of an extrapolation of what has happened in the past, predictions that will sooner or later be confronted by the unexpected appearance of a black swan.

Therefore, in order for an event to be called a black swan it must have the following properties:

It must be unexpected. This is an a priori unlikely event, where there is no evidence that it will happen and therefore it is a surprise to analysts and the market. If there were any likelihood of this happening, financial agents would protect themselves against it, so that the market would not be taken by surprise.

They have a big impact. These are events that significantly affect the economy or world politics.

They are distinguished by their retrospective predictability. In other words, once they have happened, and only then, there is evidence that such an event could have been avoided and theories are created that explain why it came to be.

The black swan theory and Covid-19

The Covid-19 pandemic currently affecting the world has all the characteristics that define a black swan case. For one thing, there was no reason to expect that the emergence of a series of cases of pneumonia caused by a new type of coronavirus in late 2019 in the Chinese city of Wuhan was going to have a global impact. However, now that the virus has spread all over the planet, we come to think that this coronavirus crisis could have been avoided or, at least, its consequences minimised, if attention had been paid to the signs.

Firstly, the experience of other previous outbreaks, such as SARS in China in 2003, bird flu, also in China in 2013, and Ebola in West African countries in 2014. Secondly, several reports and experts have been warning in recent years of the impact that a global viral outbreak could have on both human lives and the economy. This is what the Global Risk Report of the 2007 World Economic Forum reviewed, which, through a fictitious example (the emergence of a new virus in Asia), analysed the impact on business, the financial and political system and the economic conditions of the emergence of a new pandemic. Bill Gates himself also warned of this in a 2015 TED lecture during which he pointed out that the world was not prepared for a pandemic. In fact, the most recent World Economic Forum's 2020 Global Risk Report placed contagious diseases back in the top ten of risks in terms of impact.

And yet, despite all these warning calls, why had virtually none of the countries prepared for it? It was due to probability. Although these studies had been pointing to the potential impact of a pandemic for some time, their likelihood was very low, so most countries chose to dedicate their resources to other priorities.

In short, what defines the black swan theory is that, no matter how much we think we have a controlled situation, there are always random factors that escape us.

Consequences for the markets

In this respect, the consequences of one of these black swans are one of the risks that has to be faced when operating in the financial markets. Therefore, although these are events with a low probability of occurring, it would be a serious mistake to ignore them. And even though it is difficult to protect oneself against a black swan completely (because it cannot be foreseen), it is important to have a diversified and structured portfolio with different asset types so that they can act as counterweights in the event of having to respond to varying economic or financial circumstances.

And that is because, although history seems to be a sequence of unavoidable events, it is full of black swan events that have changed the course of history. The First World War, Hitler's rise to power, the crash of 1929 or 1987, the attacks on the Twin Towers, the fall of the Lehman Brothers, Brexit and the current Covid-19 pandemic are all examples of this type of earthquake, which could not be foreseen and which had significant consequences. In other words, black swans, whose occurrence, as the world has become more complex and globalised, is more common and to which investors are beginning to become accustomed.

Bitcoins, digital currency, cryptocurrency, Blockchain, these are all words that ring a bell, aren't they?